For longer than anyone can remember, even the little gods of field and stream, three clans have laid claim to the Shoku Valley: the cunning Stone Clan, the fierce Forge Clan, and the friendly Rice Clan.

For generations there has been an uneasy peace in the valley, intermarriage and trade holding firm against greed, hate, and tribal pride

The high priest of the Shrine of Storms is dead, without a clear successor. Control of the great dam that protects the valley from yearly floods is open for the taking. And with his high priest dead the God of Storms grows angry, and the very world seems to hold its breath.

Any day now the storm will break, and the valley will be littered with blossoms: beautiful, and bittersweet, and cut down in their prime.

As Blossoms Fall is a one-session microRPG about the conflict between obligation and personal feeling, set in a mythicized version of early-feudal Japan

It is an Aussie convention-style module for 5 players and one GM, which takes around 3 hours to play. It uses a streamlined custom system for conflict resolution and the revelation of character secrets.

The game features pre-generated characters, and centers theme, feeling, and interaction between characters/players over plot or problem-solving.

- The module itself, including a 4-player variant and an appendix on adapting the game for a more theatrical/LARP-like mode

- A deck of Japanese fortunes for conflict resolution

In order to download this roleplaying game you must purchase it at or above the minimum price of $10 USD. You will get access to the following files: 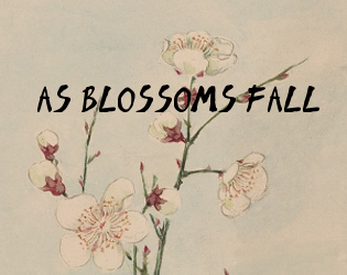